Traditional multiplex PCR is inflexible, requiring a “fixed panel” approach to assay development, and limiting its applicability to lab workflows interrogating many samples over a set panel of targets. This unforgiving format can be challenging if you need to analyse several targets in a plant or animal breeding program where targets change from project to project and generation to generation.

BHQplex™ CoPrimers™ is a multiplexing PCR technology that enables assay interchangeability from a set of functional designed assays without introducing cross-reactivity.

BHQplex CoPrimers consist of a short “Primer” sequence and a “Capture” sequence, connected by a non-extendable flexible linker to enable cooperative binding of the Primer and Capture sequences to the target. It also contains an internal “Black Hole Quencher®” (BHQ®) dye, which greatly reduces the fluorescence emitted when in proximity to the reporter dye. On extension of the Priming fragment, the fluorescent dye is cleaved, releasing the fluorophore, and generating a fluorescent signal.

The non-extendable flexible linker connecting the Primer and Capture sequences prevents the polymerase from extending through the Capture sequence, retaining the primer specificity in each round of amplification.

The Primer and Capture sequences must both correctly bind to the target in order for the polymerase to extend the Priming sequence. The non-extendable linker blocks extension of the Capture sequence alone when complementary Primer sequence does not have target-specific match. Due to the abbreviated length, the Primer sequence allows for the design of highly selective primers capable of detecting allelic changes as short as a single nucleotide. Non-specific binding, such as formation of primer-dimers which do not have cooperative binding of both the Primer and Capture sequences, will not extend during the PCR amplification step, resulting in exponential reduction of non-specific amplification.

The highly selective nature of BHQplex CoPrimers as a result of their unique structure, enable their use in any PCR application where highly selective binding is critical, especially in a multiplex PCR reaction where multiple targets and primers can be in a single reaction vessel.

In SNP genotyping applications shown in the figure below, when the variant is placed at the optimal position near the 3’ end of the Priming sequence, BHQplex CoPrimers amplify the matched target preferentially, while the amplification of the mismatched target is significantly suppressed. 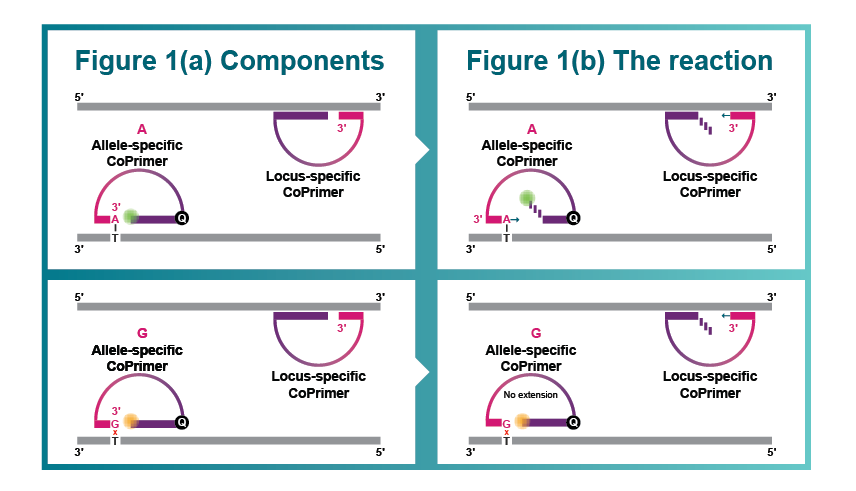 Figure 1: Alelle-specific BHQplex CoPrimers (in this case, interrogating a [G/A] nucleotide change) are designed to hybridise over the variant with the interrogating nucleotide being positioned at the penultimate base of the Priming sequence.

Figure 1a: [A]-BHQplex CoPrimers hybridises to the bottom strand of the [A] template, forming a perfect match. Subsequently, the DNA polymerase initiates from the priming sequence, and the green fluorophore on the capture fragment is cleaved.

Figure 1b: [G]-BHQplex CoPrimers hybridises to the bottom strand of the [A] template,but fails to amplify due to the lack of 3’ allele-specific binding. 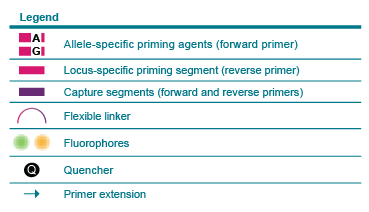 Bring flexibility to your lab with assay interchangeability

BHQplex CoPrimers address a critical shortfall of traditional multiplex PCR by enabling assay interchangeability. Traditional hydrolysis probe-based multiplex PCR requires extensive optimisation of assay pairs, and requires users to always run optimised pairs together. The highly selective nature of BHQplex CoPrimers enables users to interchange assays with one another, without the need for extensive re-optimisation of pairs. This maintains your laboratory’s flexibility, enabling a diverse set of projects with different marker sets to be run efficiently and cost effectively.

Interchangeability with BHQplex CoPrimers can be demonstrated with bovine DNA. Seven separate BHQplex CoPrimers assays were designed against purified bovine DNA, with one assay used in conjunction in a duplex SNP assay with each of the other four assays. Each assay was run in a single 5 µL reaction volume with BHQ® Probe Master Mix on a SNPline high-throughput instrument in 384-well plates in both SNP singleplex (2 targets) and SNP duplex (4 targets). Data was scored using Biosearch Technologies proprietary Laboratory Information Management System (LIMS), Kraken™, and compared to the original calls generated by KASP® genotyping. Examples of the end-point genotyping cluster plots is illustrated in Figure 2. 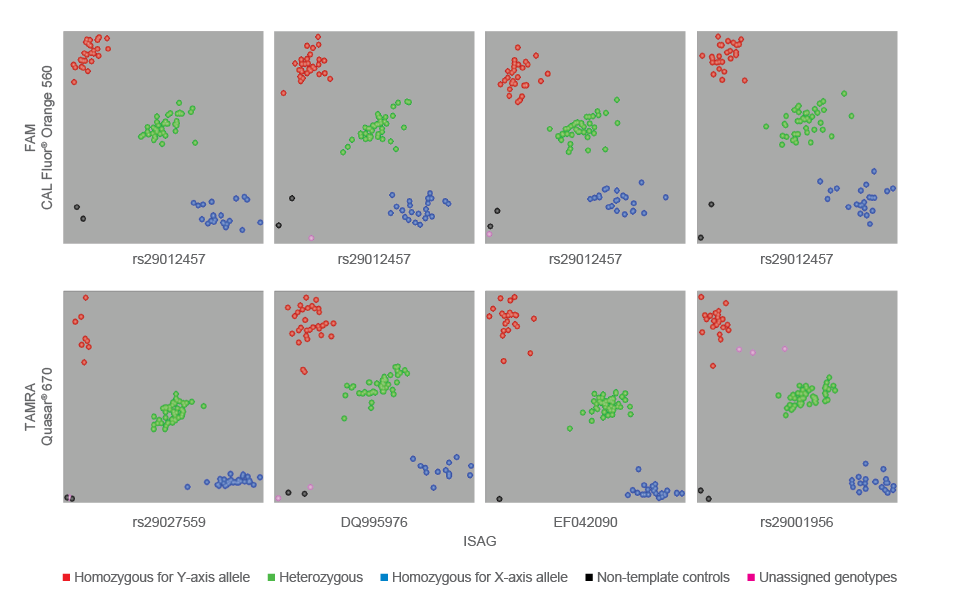 In each cluster plot, genotypes can be confidently assigned, with little-to-no amplification of the non-template controls, showing limited cross-reactivity with assay interchangeability. In all instances, clear clusters representing the homozygous and heterozygous groups can be clearly identified, allowing for rapid genotype assignment for each sample tested.

As shown in Figure 3, the call rate for a singleplex assay was 99.8%. When this assay was then duplexed (Duplex 1, Duplex 2, Duplex 3 and Duplex 4), the call rate was >99.1%, with each assay subjected to a 4x4 assay interchangeable reaction. For all assays tested, for both BHQplex CoPrimers singleplex and BHQplex CoPrimers interchangeable duplex, 100% concordance in genotype assignment was observed when compared against KASP. Importantly, it should be noted that no optimisation was performed for any of the duplex reactions illustrated. These assays were designed using standard design algorithms, and run following the recommended annealing temperature of 55 °C, indicating that robust and consistent results can be obtained by interchanging the assays in each duplex reaction with no further optimisation required. 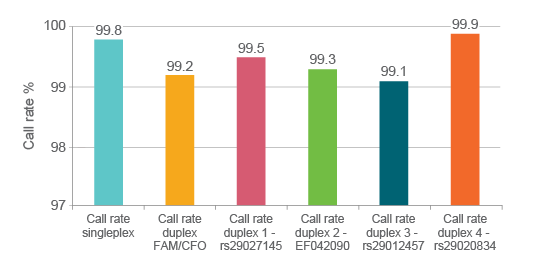 One powerful application of BHQplex CoPrimers is the ease of detection of tetra-allelic SNPs. As seen in Figure 4 with purified maize DNA, the robustness of multiplexing combined with the flexibility demonstrated by the BHQplex CoPrimers interchangeability, allows for the combining of 2 assays (each targeting a bi-allelic SNP), allowing for the detection of 4 polymorphisms at single genomic target, within a single reaction. In all examples, 100% concordance was seen in genotype assignment when compared to KASP (call rate >97%). 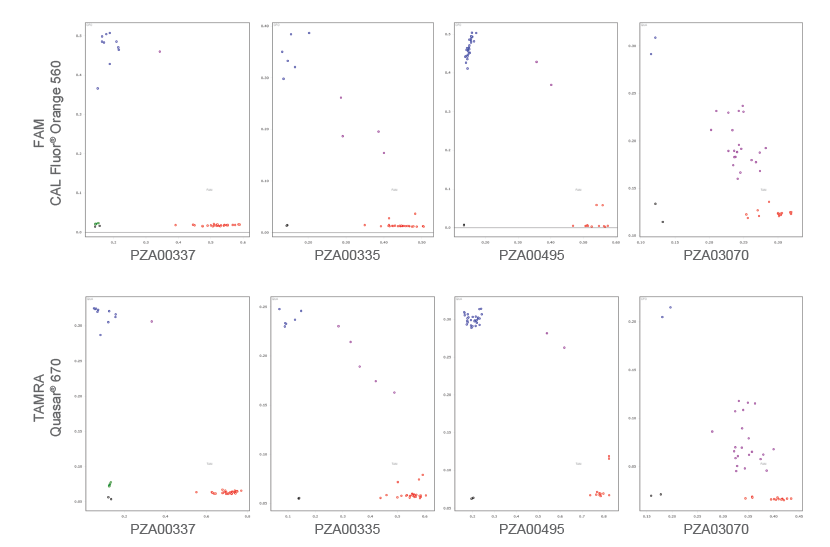 BHQplex CoPrimers is a versatile probe-like technology that is suitable for most PCR applications including Single Nucleotide Polymorphism (SNP) genotyping, Copy-Number Variation (CNV), and Adventitious Presence (AP) testing. Using the same PCR technology across all end-point and real-time PCR workflows in your lab provides the most-efficient operations. BHQplex CoPrimers can be designed for end-point and real-time PCR applications, and generate multiplex PCR savings throughout your lab.

In 10 µL reaction volumes in 384-well plates on the BIO-RAD CFX the same bovine-specific BHQplex CoPrimers as used in Assay Interchangeability studies, was used to create both a standard curve, with final genomic DNA concentrations of 6 x 104 target copies to 6 x 100 target copies using a 4log10 range (which are typically used standard curve dilutions for qPCR applications) (Figure 5).

We selected a single bovine sample with a homozygous genotype for each target and created a single and multiplex standard curve using the same template input (Figure 5(a)). From this, confidence intervals between estimated and calculated values were generated (Figure 5(b)) together with measurements of the efficiency and linearity (Table 1). Using the standard curve, we performed absolute quantification using the same template at three different concentrations and determined estimated copies in both singleplex and multiplex. As with the previous reactions, 200 nM (final concentration) labelled BHQplex CoPrimers and 400 nM (final concentration) unlabelled Common Reverse BHQplex CoPrimers were used.

With standard curve generation, each assay was labelled with either FAM, CAL Fluor Red 610 or Quasar 670. Analysis of the data allowed for the calculation of both R2 and slope values (Figure 5(a)) and in all instances, R2>0.997, with a slope -3.289 to -3.315, indicating consistent and reproducible data for all dilutions tested. This highlights the sensitivity and specificity of the BHQplex CoPrimers assays, allowing for confidence in results generated even with as few as 6 target copies per reaction. 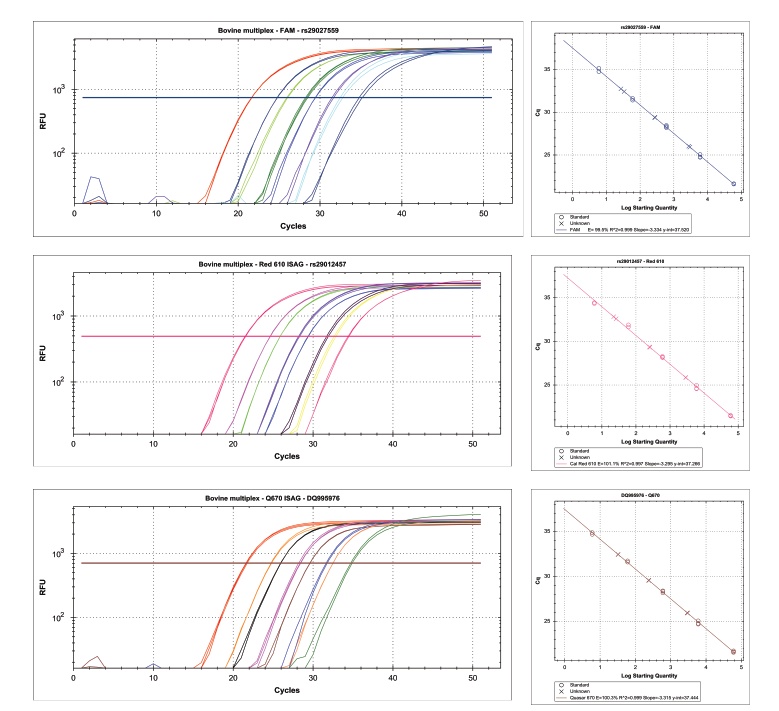 Figure 5(a): Standard curve generation for 3 bovine BHQplex CoPrimers multiplex assays (rs29027559, rs29012457 and DQ995976), in triplicate, each labelled with either FAM, CAL Fluor Red 610 and Quasar 670, respectively. For each 4log10 dilution-series a standard curve was generated, from which R2 and slope values were calculated.

For each of the assays targeted, the relative 95% confidence intervals were calculated via extrapolation from the generated standard curve with the percentage difference from reference vs qPCR estimation (Figure 5(b)). For all targets and for all copy numbers, there was little variation between the reference and the estimated values (no greater than 10% difference), showing accuracy of data generated, even at low copy number concentrations. 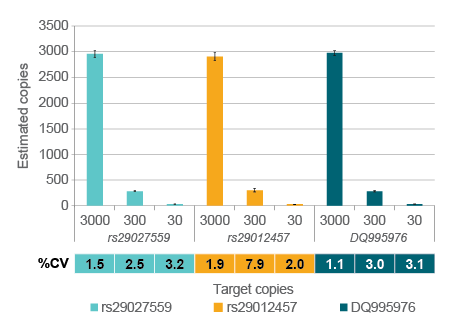 Calculations of efficiency and linearity for both singleplex and multiplex were determined (Table 1) from the standard curves generated in Figure 5. In either format, efficiency was shown to be between 90-110%, with all R2 values >0.997 down to an estimated 6 target copies. These highly reproducible data, even down to as low as 6 target copies per multiplex reaction, validate the use of BHQplex CoPrimers for the detection and quantification of low-copy number targets.

Please note that you will require PCR Master Mix in order to run your PCR reactions. We recommend our BHQ probe Master Mix to maximise performance of your BHQplex CoPrimer genotyping assays.

Should you have any questions at all, please contact us for customer or technical support.