Black Hole Quencher (BHQ) dyes for research and commercial use

Black Hole Quencher (BHQ) dyes are dark quencher dyes that quenches fluorescent signals with greater efficiency and specificity, giving you the power to unlock new insights and get your product to market faster. You can purchase BHQ dyes in CPG or amidite form to manufacture probes in house, or you can purchase custom BHQ probes synthesized by LGC Biosearch Technologies. 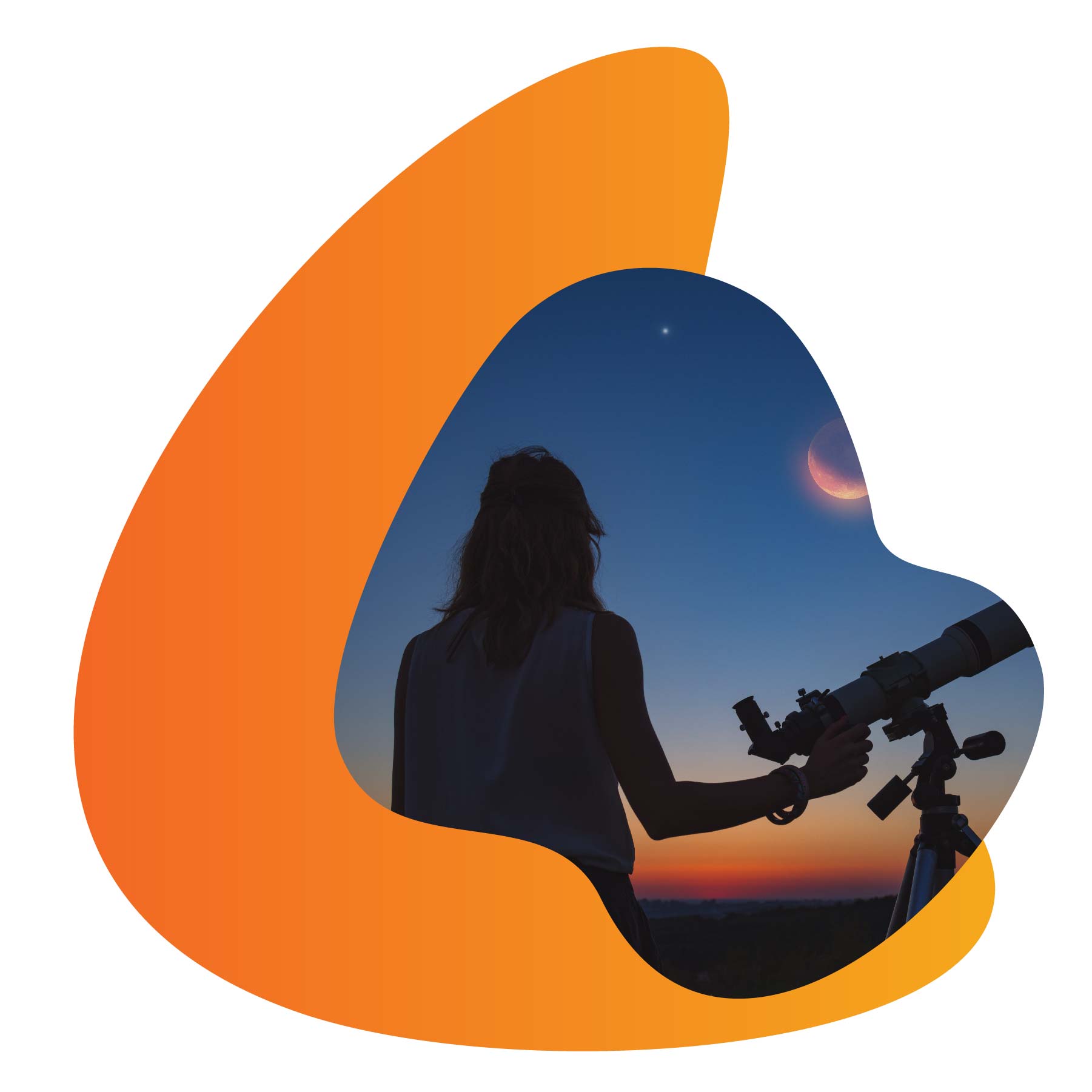 Having the right tools can make all the difference in your research. That's why we developed Black Hole Quencher™ (BHQ™) dyes over two decades ago -- to help you get the most out of your data by providing superior performance and flexibility.

With our BHQ dyes, you'll be able to quench fluorescent signals with greater efficiency and specificity, giving you the power to unlock new insights and get your product to market faster.

LGC Biosearch Technologies is at the forefront of oligonucleotide synthesis, providing next-generation reagents that enable you to push the boundaries of scientific discovery. Designed to efficiently and effectively suppress background noise, you can obtain clearer data and more reliable results.

BHQ dyes are the only dark quencher dyes that enable you to synthesize your own oligos. Researchers have the option to purchase BHQ dyes directly (either CPG-bound, phosphoramidites or esters) to manufacture their own BHQ-labeled probes, or purchase BHQ probes synthesized by Biosearch Technologies based on the same groundbreaking dark quenching technology. 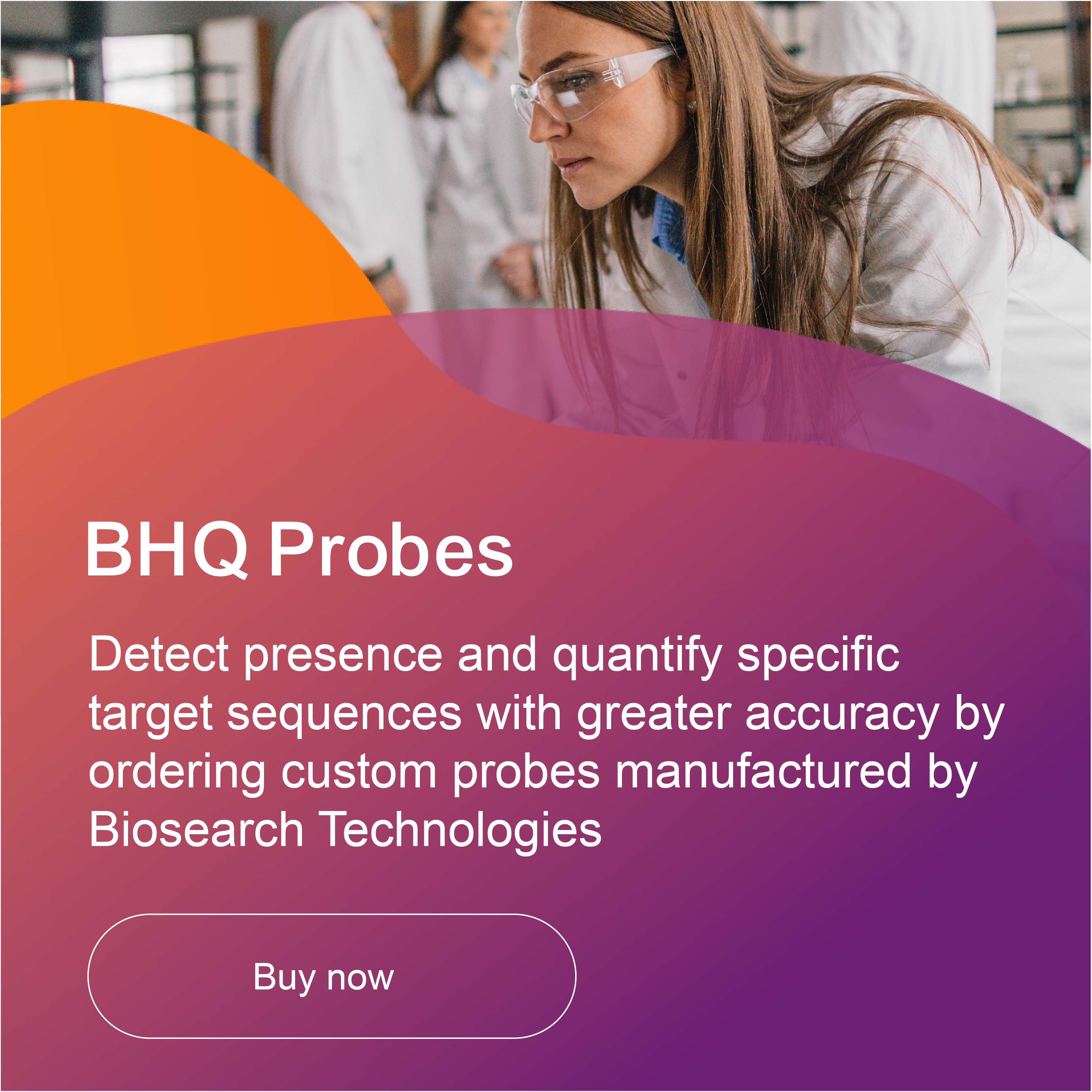 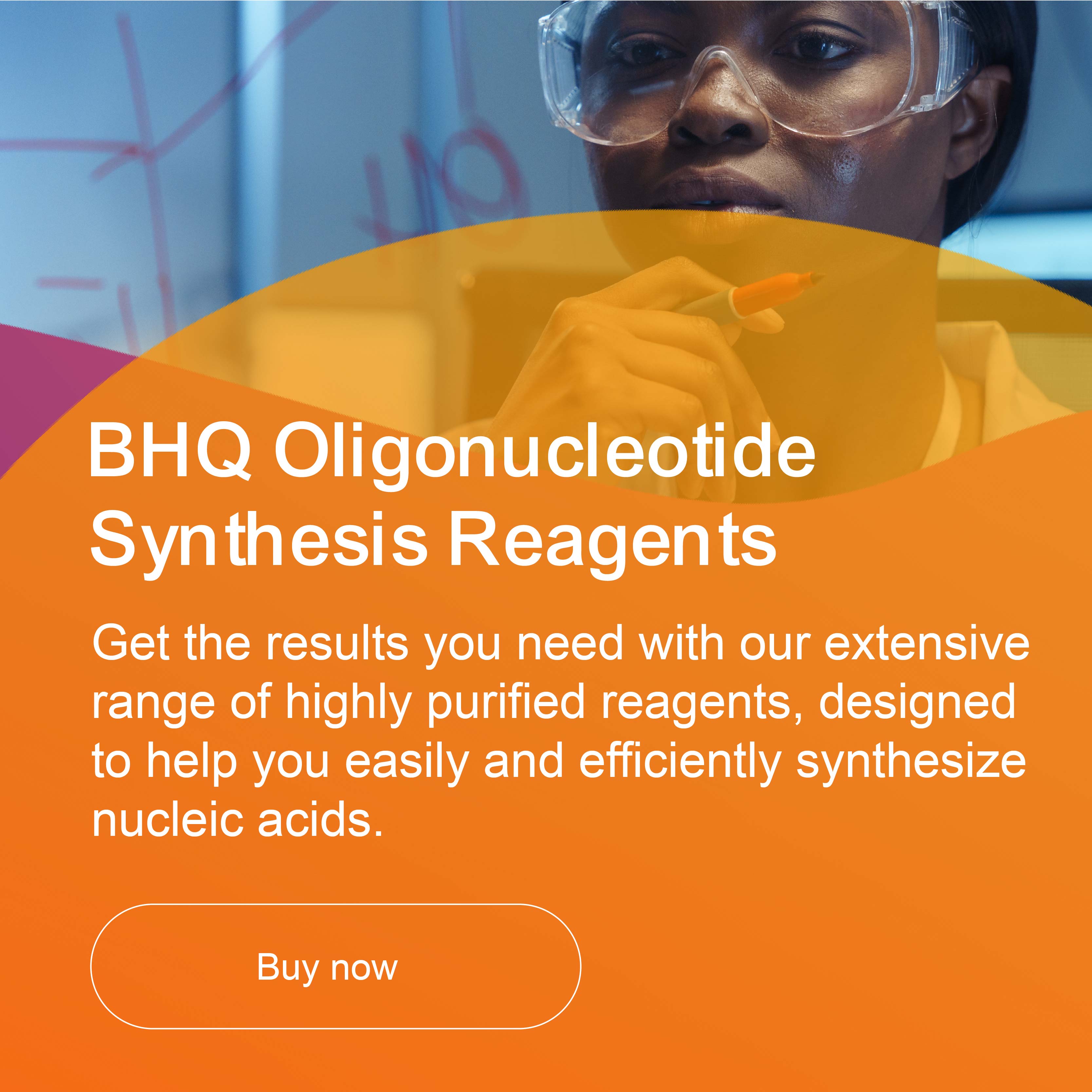 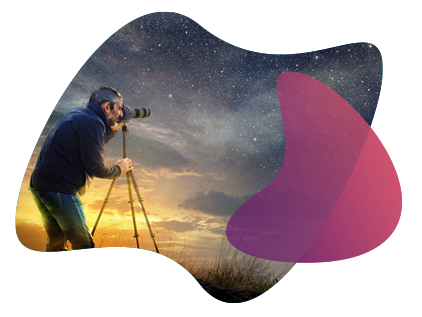 Versatile dyes for every application

Research can be unpredictable. That's why we design our dyes to be flexible and adaptable, so that they can meet the changing needs of your experiment. Our BHQ™ dyes are the most versatile and robust quencher dyes on the market, and have been used in a variety of applications:

Your single source for BHQ dyes

We recognize how important it is to have a secure and reliable supply chain for critical components. That's why we develop and manufacture our own BHQ dyes in-house, ensuring that you can count on us to deliver the dyes you need, when and where you need them. 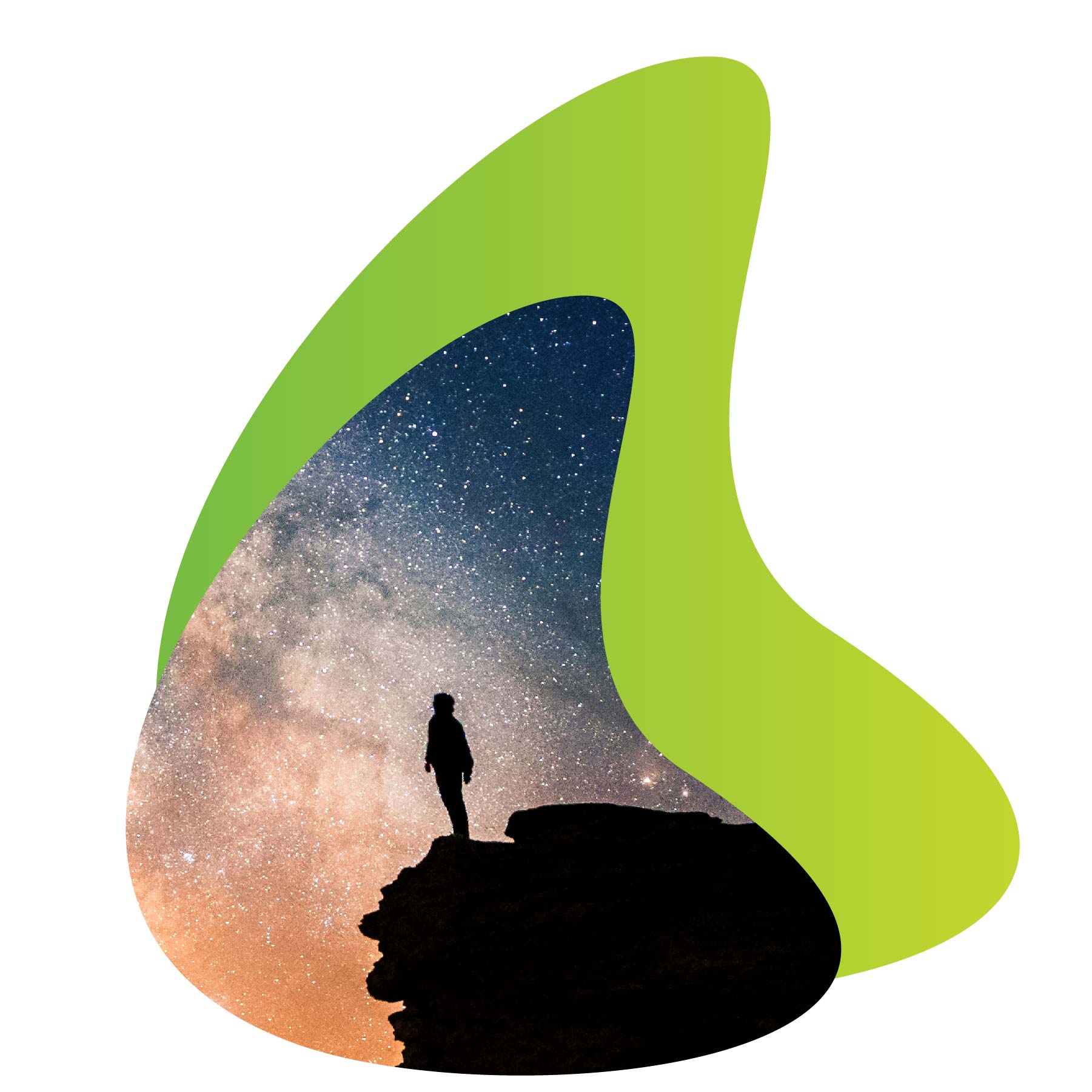 For more than 20 years, our Black Hole Quencher (BHQ™) dyes have been the go-to quencher for qPCR probes and other fluorescence-quenched probe applications. And for good reason:

Quenching is a mechanism used to absorb the fluorescence emitted by the reporter, until a change in their distance will produce a maximal change in detectable fluorescence and effectively signal the event being monitored (often hybridization or nuclease activity).

A quencher is a type of molecule attached to an oligonucleotide that quenches fluorescence emitted by a fluorophore when excited by FRET (Förster Resonance Energy Transfer).

How does a quencher work?

The reporter and quencher are placed at specific sites in an oligonucleotide such that a change in their distance will produce a maximal change in detectable fluorescence and effectively signal the event being monitored (often hybridization or nuclease activity). The oligonucleotide acts as a flexible tether linking the fluorescent reporter and quencher.

What is a BHQ quencher?

Black Hole Quencher (BHQ) labels are a family of dark quencher dyes with excellent spectral overlap with all common reporter dyes for efficient FRET quenching. As a result, BHQ labels have become the industry standard for quenchers in dual-labeled hydrolysis probes and many other molecular probe formats.

Black Hole Quencher dyes are true "dark" quenchers with no fluorescent signal, improving signal to noise ratios. Through a combination of FRET and static quenching, they deliver results without the residual background signal common to other quenchers. Their complete quenching simplifies design, implementation and interpretation of qPCR assays.

What is the original true dark quencher?

BHQ dyes are true dark quenchers with no native emission due to their polyaromatic-azo backbone. Substituting electron-donating and withdrawing groups on the aromatic rings produces a complete series of quenchers with broad absorption curves that span the visible spectrum.

BHQ dyes work through a combination of FRET and static or contact quenching to enable researchers to avoid the residual background signal common to fluorescing quenchers such as TAMRA, or low signal to noise ratio. These quenchers can be paired with all common reporter dyes to construct efficiently quenched qPCR probes for multiplexing assays. In addition to quenching by FRET, BHQ dyes have also been shown to efficiently quench fluorescence through static or contact quenching via formation of an intramolecular ground state complex with the reporter dye.

What is the difference between Black Hole Quencher (BHQ) dye and TAMRA?

TAMRA dye is an effective quencher for fluorophores with emission maxima less than 560 nm. Dyes with longer wavelength emissions will not be effectively quenched by TAMRA. In addition, TAMRA has its own fluorescence which complicates data analysis due to crosstalk between the channels. In contrast, Black Hole Quencher™ dyes are true "dark" quenchers with no fluorescent signal. Their use simplifies design, implementation and interpretation of qPCR assays.

Furthermore, BHQ™ dyes have broad absorption spanning 480-580 nm (BHQ-1), 559-670 nm (BHQ-2) and 620-730 nm (BHQ-3), to enable use of a large range of spectrally distinct reporter dyes in multiplexed assay designs. With some dye pairings, FRET quenching is supplemented by the static quenching mechanism. Specifically, hydrophobic and electrostatic interactions facilitate the association of BHQ dyes with certain reporters to form an intramolecular dimer, for enhanced quenching and improved signal to noise ratios. Thus, BHQ dyes may quench some fluorophores whose emission spectrum is beyond the limits of BHQ absorption.

Want to learn how our BHQ dyes can unlock the power of your research?