The 100 most important crops, e.g. African eggplant, amaranth & spider plant, have been assembled by African scientists. The focus of the project is to sequence & map the genomes to allow accelerated breeding programs.

A list of the 100 most important subsistence crops has been assembled by African scientists and their colleagues elsewhere, and will be the focus of a project to sequence and map the genomes to allow accelerated breeding programmes assisted by molecular breeding tools and technologies. The crop list, which includes African eggplant, amaranth and spider plant, is available at the consortium’s website. With generous in-kind contributions by its partners, the consortium will sequence a reference genome and 100 lines for each of the crops listed.

The list of 100 species is being released so that researchers around the world can contact the consortium with suggestions for research needs regarding the selected species.

The first orphan crop to be studied will be baobab, which can be used as a dried fruit powder for consumer products. Baobab is called "the wonder tree" in Africa because its fruit has antiviral properties and other health benefits, ten times the antioxidant level of oranges, twice the amount of calcium as spinach, three times the vitamin C of oranges and four times more potassium than bananas. 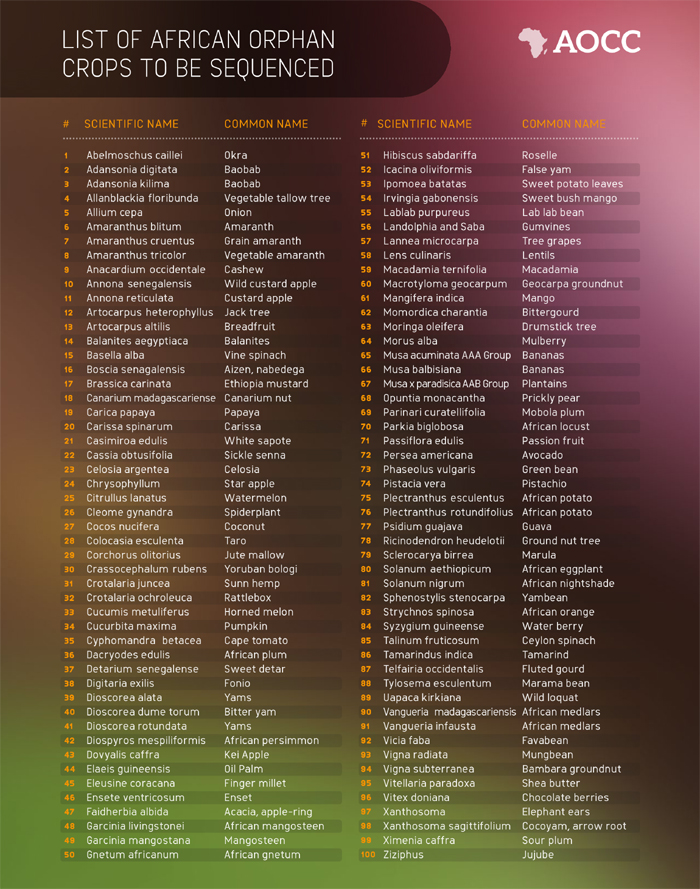