Black Hole Quencher Operates With More Than One Quenching Mechanism

Until 2002, it was accepted or assumed that reporter-quencher pairings should be made according to Förster theory. However, many dyes are known to aggregate, self-associate, to form dimers, trimers, etc. This tendency for dyes to aggregate is the basis of the static quenching mechanism.

This publication compares many reporter-quencher pairs and assesses their FRET and contact quenching efficiencies.

This is the featured cover article.

Distinctions between Static Quenching and FRET

Static and FRET quenching can occur together.

Quenching in a dual-labeled probe can occur through a combination of static and FRET quenching.

Förster distances can be calculated from spectral data. However, this data is often of limited use for oligo probes for the following reasons: 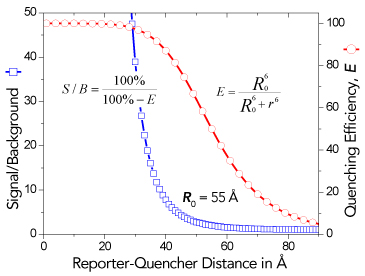 Thus, in this FRET pair, going from a reporter-quencher distance of 34 Å to 48 Å causes a dramatic change in the
signal/background ratio: from 20 to 3.2.

For more information about quenching mechanisms please refer to the references listed above.  Questions about Black Hole Quencher and Quenching mechanisms can be directed to our technical services team at techsupport@biosearchtech.com.

Choice of Quenchers: The evolution from TAMRA to Dabcyl to BHQ labels 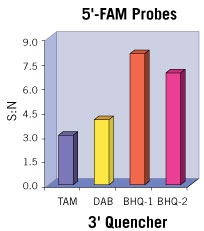 FAM-TAMRA probes, oligonucleotide probes with fluorescein (FAM) as a 5' label and tetramethylrhodamine (TAMRA) as a 3' label, were commonly used before the availability of dark quenchers and are still used by some groups today. With these probes, FAM is the reporter dye and TAMRA is the acceptor dye. These probes work well due to the good spectral overlap between the FAM fluorescence and TAMRA absorption curves. In a FRET assay, the FAM dye is excited at 490 nm and transfers energy to TAMRA. The FRET mechanism returns the FAM reporter to the ground state and generates TAMRA in an electronically excited state without any light emission or absorption. Due to FRET, the amount of FAM fluorescence loss at 520 nm is proportional to the amount of TAMRA fluorescence gain at 580 nm.

Unfortunately, when a fluorescent dye, such as TAMRA, is used as a quencher, its fluorescence can contribute to background signal. In addition, such quencher fluorescence makes multiplexing, in which more than one reporter-quencher pair is used simultaneously in a reaction, more difficult. These limitations led to the use of Dabcyl which is known as a dark quencher because it is not fluorescent. Dabcyl, however, has limited utility as a FRET quencher because it has an absorption maximum at 453 nm, which is blue-shifted and far removed from the emission maxima of most reporters. Therefore, Dabcyl has poor spectral overlap and consequently minimal FRET quenching.

Black Hole Quencher® (BHQ®) labels are a family of dark quenchers with excellent spectral overlap with all common reporter dyes for efficient FRET quenching. As a result, BHQ labels have become the industry standard for quenchers in dual-labeled hydrolysis probes and many other molecular probe formats.

The most recent or “highly evolved” addition is the BHQplus™ probe. The BHQplus probe is a novel, compact probe for qPCR with a duplex stabilizing technology terminated with Biosearch’s Black Hole Quencher dye. The stabilizing technology permits the design of shorter oligonucleotides which enables greater specificity as well as the detection of more difficult targets such as AT-rich regions.  BHQplus probes are especially well suited to detect single nucleotide polymorphyisms.

Unlike static quenching, FRET is a through-space mechanism in which energy from the reporter dye is transferred to the quencher without absorption or emission of light.

Efficient FRET requires:
a) Proximity: the donor and acceptor molecules must be close to each other (approx. 10 – 100 Å). FRET is extremely distance dependent.
b) Spectral overlap: the absorption spectrum of the acceptor must overlap with the emission spectrum of the donor.
c) Relative donor-quencher orientation: in most assays with fluorescent probes, it is assumed that the relative orientation of the dyes is random.
Key equation for FRET: